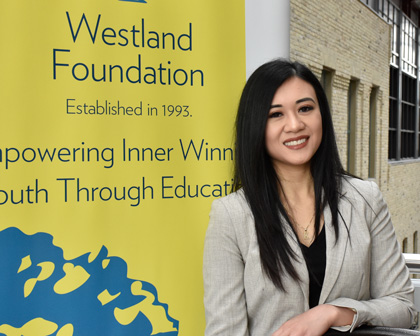 Kimberly Solis was born and raised in Winnipeg to Filipino immigrant parents. Her father is from Cavite, and her mother is from Laguna, Philippines respectively.

Kimberly recalled working two to three part-time jobs while in high school and university. Throughout her years of being a student, she focused on finishing her Criminal Justice degree.

Wanting to make her parents proud, Kimberly worked hard on excelling in each class. Her hard work did not go unnoticed when she awarded a scholarship from the Westland Foundation in 2012.

“I did not think I was able to ever get a scholarship in my life, but I did,” said Kimberly. From then on, she has believed that education and hard work lead to success. Kimberly said the Westland Foundation helped her financially by paying for some of her tuition at Red River College.

Kimberly is now working as a counsellor at United Church Halfway Homes. She also operates her own beauty business called Kim Chatelaine. She is now helping out her parents, who both work part-time, and she has a brother who finished college last year and is currently working, too.

“I was helped by the Westland Foundation financially, and now I am helping others as well,” she said.

Kimberly pays it forward by donating to her church and volunteering. Last January, she went to California on a mission trip to help previous law offenders, drug addicts, sex trade workers and homeless people. She helped build furniture for low-income families so that the Child and Family Youth Services would not take their children away. She also gave out food to many families and cleaned up garbage out there.

Kimberly advises young people to put God first, be healthy and to believe in themselves. She says not to let anyone put them down and to surround themselves with positive influences and people who want them to grow.

“I believe that there is always a reason for whatever happens in our lives. The challenges and trials that we go through in life make us stronger. We become more knowledgeable, and we gain more wisdom from our difficult experiences. However, the choices that we make every day, whether it is positive or negative is what directs us to our future,” said Kimberly.

Kimberly Solis was a featured Red River College Westland Foundation Scholar on the Foundation’s video presented at the 2019 Fundraising Breakfast held last May 15th at the RBC Convention Centre.

Marilyn Camaclang is the Communications & Development Coordinator of the Westland Foundation Inc.