I moved to Canada eight years ago and I can still remember how difficult it was to adapt to the different school environment. I found the format of classes confusing and it did not help that I did not know anyone. I was struggling until ANAK’s Kapatid In-School Mentorship Program started. The program helped me get back on track and I ended up graduating high school with honours, scholarships and awards.

I was lucky to be a part of the Kapatid program from the very beginning. Since then, I have successfully completed my nursing degree at the University of Manitoba and have become a registered nurse. Without the help of the program, I wouldn’t have had the confidence to establish my goals. I became familiarized with the new school system and gained a boost in self-esteem to be able to interact with others. I also became aware of the cultural differences that exist in schools.

While attending university, I also volunteered as a mentor. I wanted to help Filipino newcomers the same way ANAK’s program helped me. Being a mentor made me realize that the program was mutually beneficial for both the mentor and the mentee. I continued to learn more about and build on my new Filipino-Canadian identity. My fellow mentors became good friends. And most of all, I got a rewarding feeling knowing that somehow I can have an impact on others.

In addition to supporting newcomer youth and welcoming them to this Canadian school system with as much ease as possible, the program has also been a cultural bridge between first and second generation Filipino-Canadian youth. This mentor-mentee cultural exchange is facilitated by various socio-cultural activities throughout the school year. As the name of the program suggests, I, as a mentor, became their kapatid, their sibling. As an older sibling-figure, I looked out for my siblings to make sure that they were coping well, not only in school, but also in other socio-cultural aspects as well.

ANAK’s Kapatid In-School Mentorship program is now starting its ninth year. It’s been an honour to be part of the program that was recognized in the Philippines and Filipino community across North America when it was awarded a 2014 Gawad Geny Lopez Jr. Global Bayaning Pilipino Award. I have seen how the program has progressed and how it continues to grow and adapt. From being a mentee, to becoming a mentor, to chairing ANAK’s mentorship committee, to being elected as ANAK’s director this , I look forward to learning more and building ANAK for the next generation.

I invite you to volunteer and make a difference in the community. Be a part of making this year a success and contribute to future successes.

Ricardo Reyes is the director of ANAK. To learn more about the ANAK Kapatid In-School Mentorship Program and how to become a volunteer visit www.anak.ca or e-mail info@anak.ca. 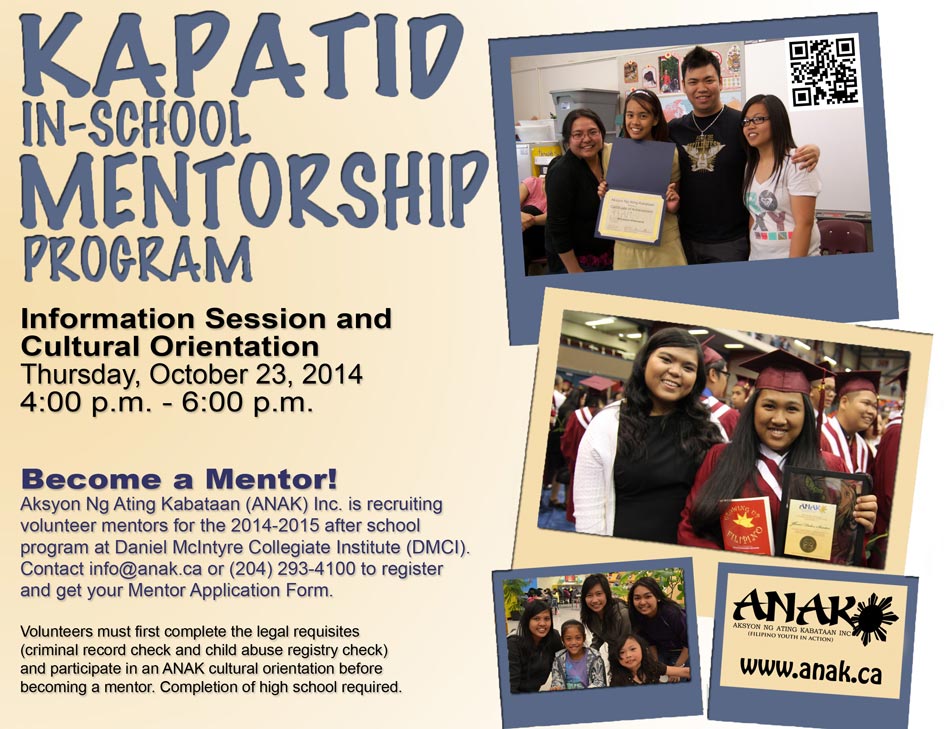