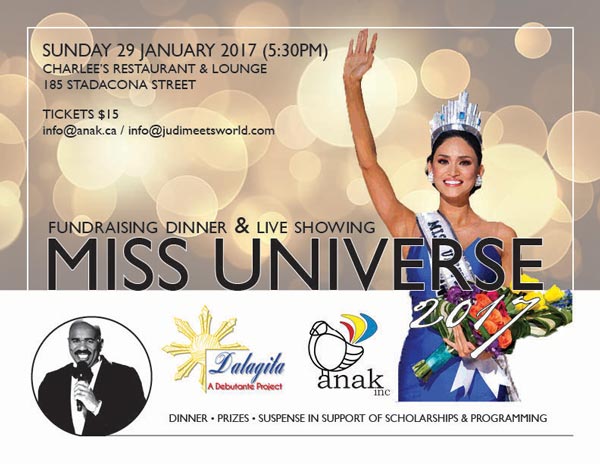 In just a couple weeks, on January 30 (January 29, 6:00 p.m. Winnipeg time), the annual beauty pageant will be airing its million-dollar show. Contestants from almost every country in the world will have trained for the competition for months – more likely, mentally preparing for it for years – in order to ensure they are poised, fit, well-mannered under pressure, and “beautiful” (conventionally-speaking) enough to be judged and assessed according to set criteria in order to vie for a title. Though the ultimate prize is to come out on top, individuals are also acknowledged if they get close, or if they have an awesome national costume, are selected by their peers for congeniality, or are voted as being photogenic.

This year’s Miss Universe competition is being hosted in the Philippines, and it is also the home country of the current titleholder, Pia Wurtzbach, who is from Cagayan de Oro in Mindanao. The show will be held at the Mall of Asia Arena in Pasay, and tickets are going for between $160 to $1000 USD a pop. There are even tour packages for returning overseas Filipino workers.

The Philippines has now held three Miss Universe crowns, first in 1969 and then in 1973, and has also secured multiple crowns at other international beauty pageants – one Miss World, six Miss International – including Kylie Verzosa’s recent win in 2016, and three Miss Earth crowns. While representatives from the Philippines have been performing well on the global “stage,” so to speak, Filipinas compete in beauty pageants at all levels. There are many “Miss” contests throughout the country, in various regions, and the tradition has continued abroad in Philippine diaspora communities. The events are important social functions that have historically brought townspeople together to socialize and starred dalagas who were coming of age. It was an opportunity for pretty and ambitious young women to participate and showcase their appearance, intelligence, talent, and presentation skills.

The first beauty pageants in the Philippines began with the Manila Carnival, the first of which was held in 1908. Shortly after the end of the Philippine Revolution in 1898, when the Philippines became independent from Spain but was handed over as a colony to the U.S., the festival was organized to celebrate American and Philippine relations. There were parades featuring the military, civic organizations and schools – based on an American educational framework. In addition, agricultural products, businesses and industrial innovations were featured from provinces all across the islands. The main event of the Manila Carnival, however, was the crowning of the Carnival Queen, chosen through a ballot-voting system with contestants who came from the wealthy elite. This process was later changed to have judges, and contestants now come from different socio-economic backgrounds.

To commemorate this colourful tradition of Filipino culture and our motherland’s success on the world pageant scene, Aksyon Ng Ating Kabataan (ANAK) Inc. and Dalagita will be hosting a Miss Universe Viewing Party at Charlee’s Restaurant, 185 Stadacona Street, on Sunday, January 29th at 5:30 pm. Come join us for a Filipino fusion dinner, support local Filipino youth organizations on cultural identity and skill development, get pampered at one or two of the self-care beauty stations, don a tiara, and watch whether Pia gets to hand over her crown to this year’s Miss Philippines, Maxine Medina! For tickets or more information, contact info@anak.ca or info@judimeetsworld.com.

Johsa Manzanilla has been watching endless amounts of YouTube make-up tutorials in anticipation for the Miss Universe Party on January 29th at Charlee’s (185 Stadacona). She hopes to see you there. She is the current Director of ANAK.