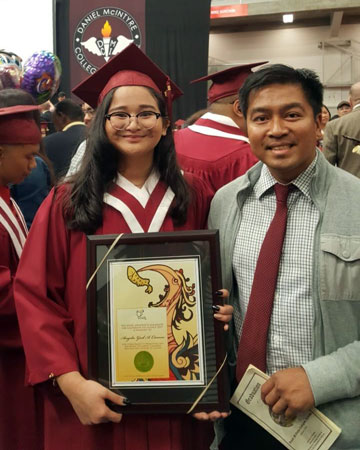 Angela Gail Ciceron was awarded the 2019 ANAK Liwayway Scholarship for Leadership Excellence based on her high school GPA, a group interview, and an essay in response to the questions, “How can you minimize Canada’s environmental impact on the Philippines?” and “How are people of the Philippines taking control of climate change?” The following essay was her submission.

The increasing threat of environmental issues, such as climate change and pollution, on the Philippines is a cause for great concern, considering the vulnerability of the country against tragedies that can serve as its consequences. There has been a continuous movement towards decreasing carbon emissions not only to satisfy the Paris Agreement, which the Philippines ratified in early 2017, but for the betterment of the country’s sustainability. However, as Filipino immigrants, it is also our responsibility to lessen the environmental impact of Canada on our home through making actions towards sustainability by decreasing the production of waste in local households.

In March 2017, the country served as a signatory to the Paris Agreement, which was initiated by the United Nations Framework Convention on Climate Change and aims to decrease the amount of carbon emissions of each state. Although the Philippines ratified the agreement in 2017, movements towards accountability for carbon emissions had already begun in 2016 after the country struggled through a significant number of strong typhoons caused by the increasing temperature of the ocean. Both citizens and organizations accused 47 corporations, including Shell, BP, and Chevron (dubbed the “Carbon Majors”), of significantly contributing to the amount of greenhouse gases emitted into the atmosphere (Savaresi, et al.). The petition initiated a series of investigations launched by the Philippine Human Rights Commission in 2018, which include a “series of fact-finding missions and public hearings in the Philippines, London and New York” (Savaresi, et al.). The investigations aim to hold corporations accountable for their carbon emissions.

The issue of pollution also serves as a work in progress in the country due to the impact of developed countries, such as Canada, on these matters. The shipping containers sent from Canada to the Philippines, which were full of household waste rather than recyclable materials, still serve as a national concern because of how it establishes the significance of Canada’s impact on pollution in both the Philippines and globally. Thus as immigrants in a developed, major state, it is our responsibility both to our homeland and to the rest of the world to reduce the production of waste in our households. This includes investing in a more sustainable lifestyle, especially in terms of fashion and the products we use. A majority of affordable fashion in Canada, such as H&M, Forever 21, and Joe Fresh, do not practice sustainable processes. Thus, being able to buy second-hand clothing or “upcycling” clothes will reduce the amount of pollution that the fashion industry produces, which is the second most polluting industry in the world (Villarta). Additionally, buying more recyclable products and taking advantage of our blue bins will not only decrease waste, but will also promote sustainable processes, such as recycling, in the community. Both these actions are smaller steps towards sustainability, but will have a significant impact if the majority of the community has the initiative to do so.

The movement towards sustainability and decreased carbon emissions is a battle fought by countries such as the Philippines, who are vulnerable to the consequences of these issues, which include an increase in sea levels and stronger typhoons. Thus, as both immigrants and global citizens, it is our responsibility to promote these initiatives and start making changes in our lifestyles for the betterment of our own tomorrow.

Angela Gail Ciceron graduated from Daniel McIntyre Collegiate Institute and is studying at the University of Manitoba. Visit www.anak.ca to learn more about the 2020 ANAK Liwayway Scholarship, as well as other ANAK programs, opportunities, and ways you can get involved or support our youth.