In my last article, I wrote about the extension of the inheritance tax amnesty in the Philippines and why this was good news for those who want to settle their inheritance issues.

This article will discuss the two basic ways by which Philippine property may be inherited: intestate or testate.

Intestate inheritance is when there is no valid last will and testament, which apportions the estate. In the absence of a will, the estate of a deceased Filipino will be divided among the heirs according to the provisions of the Civil Code of the Philippines. This is usually to the spouse, children, parents, siblings, or perhaps to cousins or other extended family.

Testate inheritance is through a valid last will and testament. The testator writes out a will according to the legal forms of either Philippine or foreign law. The estate will then be allocated to the heirs named in this will.

There are formal as well as substantive requirements for a will to be valid.

On the formal side, the Civil Code has requirements for how a will is made and executed by a testator. The Civil Code allows two options: 1. a completely handwritten will, which is dated and signed by the testator; or 2. a typewritten, notarized will witnessed by three disinterested persons. An alternative is to make a will according to the formal requirements of the place where it was made, such as Canada.

How is either intestate or testate inheritance put into effect?

Intestate heirs must execute a notarized document called an extrajudicial settlement of the estate. In this document, they identify the properties covered by the estate and agree among themselves on how these are to be divided.

Since the heirs may be scattered between the Philippines, Canada, and elsewhere, it is often practical for some of the heirs to empower another to sign the extrajudicial settlement on their behalf.

The extrajudicial settlement may then be brought to the Bureau of Internal Revenue, the Registers of Deeds, the banks, and other institutions to implement its terms and transfer the title or ownership of the assets to the heirs.

An extrajudicial settlement is only possible if all the legal heirs are in unanimous agreement. If they are not, if even just one of them refuses to approve the agreement, then a case to settle the estate must be filed in court.

A court case is also necessary when there is a last will and testament. This is called a probate case (or a reprobate if it is a foreign will). Probate is a court process that authenticates the will, proving to the court that it really is the last will and testament of the testator and that it complied with the formal requirements for a valid will. No will can transfer property unless it has undergone probate.

The probate case is filed in the city or province where the testator resided or in which the property is located. Evidence to prove the will’s authenticity must be presented in court. The court will weigh the evidence and rule on the validity of the will. The will’s executor shall implement the will after a favourable ruling and then submit a report to the court.

How long will the court process take?

This depends on several factors, such as how heavy the court docket is and whether any heirs file an opposition to the probate.

Interestingly, a probate case can be instituted even while the testator is still alive. The testator himself or herself obtains a court ruling on his will’s validity during his or her lifetime. Of course, a will that the testator submitted for probate and personally affirmed in court is much more certain to be upheld by the judge. This shall spare the heirs of the trouble and cost of probating the will after his death, allowing them to implement the will’s provisions with far less inconvenience after the testator passes away. 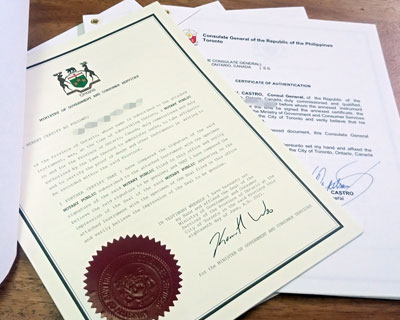 It is common among Filipino families, when the parents pass away, for the children not to pay the inheritance tax nor complete the legal steps to transfer the family properties in the Philippines to their names. Instead, the children come to an informal agreement on who will use the family property without settling their parents’ estates in the country.

Although convenient in the short term, this arrangement becomes a problem because the estate tax is incurred upon the death of the owner. Its payment is a condition for the transfer of title to the properties. If left unpaid, the estate tax is subject to interest, surcharges, and penalties, which continue to accrue year after year.

It is in this way that grandchildren in Canada can find themselves owning Philippine properties they cannot do anything with because these are still registered in their grandparents’ names. By then, the years or decades of accumulated fines are too much for even willing heirs to pay.

The Philippine Estate Tax Amnesty is a solution to this problem. We are happy to note that the amnesty’s effectivity has recently been extended until June 14, 2023. The amnesty applies to unpaid taxes on the Philippine estates of persons who died before January 1, 2018.

The amnesty sets the rate at which Philippine estates are taxed at 6 per cent. It also forgives them of the accrued interest, surcharges, and penalties from failure to pay the inheritance tax for all these years. The amnesty is a singular chance for Filipino families to finally register inherited properties in the names of the present heirs or to sell them to buyers.

The law extending the amnesty also does away with an obstacle that kept many families from availing of it earlier.

Previously, the law provided that the Bureau of Internal Revenue (BIR) could only accept payment of the 6 per cent estate tax if the BIR was shown proof of the settlement of the estate among the heirs. This meant that the BIR had to be shown either: 1) a formal agreement among the heirs on how the estate is to be divided (an extrajudicial settlement); or 2) a Philippine court judgment settling the estate.

Doing either of these takes much work, often requiring coordination and negotiation between family members scattered around the world, to say nothing of the extensive title investigation, paperwork, and legwork that inevitably accompany the settlement of an estate. The requirement prevented many families from availing of the amnesty.

This will allow the heirs to pay the 6 per cent tax even while the settlement between them is still being worked out. This way, the tax can at least be paid off in time and the estate will no longer be liable for the massive, accumulated fines after the amnesty period expires.

The inheritance tax can now be paid, unlocking the family estate to finally be transferred to the heirs or for them sell.

Of course, to complete the transfer of the titles from the decedents’ names to the living heirs or to sell the properties, the heirs will eventually need to finish the estate settlement (through extrajudicial settlement or in court). But, if they pay the estate tax before the 2023 deadline, they can work on the title transfer knowing they will no longer have the inheritance taxes and immense, accumulated fines to worry about.

How to settle the estate

To settle the estate, they must first take stock of what documents they have relating to the properties. The more complete their documents are at the outset, the easier it will be to accomplish the land transfer.

Do they have the Owner’s Copy of the land titles? Do they have the updated real property tax declarations? Is there a last will and testament? Answering these questions can require a lot of investigation for Filipino families scattered across the world.

If the documents are incomplete – and they usually are – then they must be gathered. This requires sending someone to check with the Register of Deeds and the city or municipal assessor’s offices in the Philippines, among others.

The heirs should also confer so that, if possible, they can all agree on how to apportion the estate. Their agreement can be put in writing as the extrajudicial settlement of the estate. This is a notarized document that becomes the basis for the transfer of title to the living heirs, or the sale of the property, or whatever disposition the heirs agree to.

Since it is common for heirs to be scattered around the world, getting them to all sign off on the settlement can itself be a logistical task. It may require each of the heirs to sign the document and have it notarized in turn, or they can make a special power of attorney authorizing someone else to sign it on their behalf.

If unanimous agreement is not possible, then the heirs must consider asking a Philippine court to resolve the dispute between them. A court case is not ideal because it is costly in time and treasure, but it may be necessary if an agreement cannot be reached.

Once the documents are completed, there will be rounds of transactions with Philippine government offices to put all this into effect and allow the transfer or the sale.

For these families, the task ahead is probably not simple, but it is made worth it by the estate tax amnesty.

There is still no general divorce law in the Philippines, but a Canadian divorce can be legally recognized there if either spouse was not a Filipino at the time of the divorce.

Citizenship at the time of the divorce is what matters. Even if the couple were both Filipinos when they married, the divorce can be recognized in the Philippines if at least one of them was not a Filipino citizen when it was granted.

The divorce can be recognized regardless of who filed for it. So long as one of them was not a Filipino when it occurred, it does not matter if the divorce was initiated by either the Canadian or the Filipino spouse.

How can it be recognized?

A case to recognize the Canadian divorce is filed with a court in the Philippines.

What will the court require?

The case is not going to relitigate the divorce that already became final in Canada. Rather, this is simply a case to prove to the Philippine court that a valid divorce took place in Canada.

These documents can then be shipped to the Philippines. With these, your lawyer can file the case in court even while you are in Canada.

It is preferable that the applicant testify to these documents at the trial. Since the onset of the pandemic, Philippine courts have adopted video conference court hearings that allow testimony to be received remotely. (At the time of this writing, the rules for remote video testimony from abroad are being worked out between the courts and the Department of Foreign Affairs.)

The court process usually takes about a year or a year and half until a court decision is issued, although the pandemic also affects this timeline.

How is recognition granted?

Recognition of the divorce will allow the Filipino to remarry under Philippine law. It also clarifies property and inheritance rights between ex-spouses and allows a Filipina to revert to her maiden name on her Philippine passport.