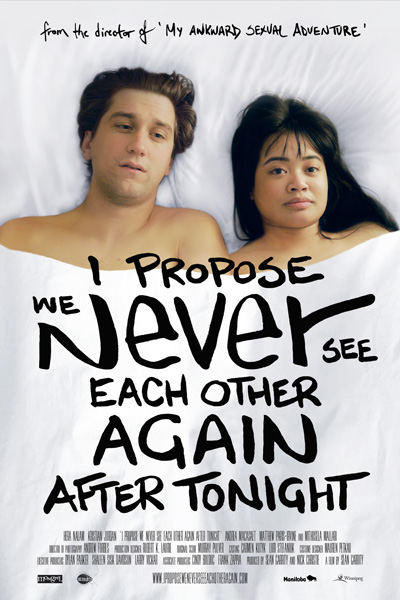 I propose we watch this movie!

These are just some of the takeaways from the new movie, I Propose We Never See Each Other Again After Tonight by award-winning Canadian director, Sean Garrity.

The film, which was originally slated for release last March but had the misfortune to coincide with the first shutdowns of the COVID-19 pandemic, will now open August 21 at the Cineplex Odeon McGillivray Cinemas.

In what may be a first for a Canadian movie, 20 of the 29 cast members are Filipino-Canadians, mainly from Winnipeg.

The Pilipino Express spoke with Sean about his unique new film.

PE: Tell us about the idea behind your new movie, I Propose We Never See Each Other Again After Tonight. Was it years in the making? Was it full of challenges or was it a smooth project from beginning to end?

SG: I was making films in Toronto for a few years, and when I moved home again, I wanted to make a really Winnipeg movie. So, I started writing a romantic comedy where one character was Filipino and one was Mennonite, and I wanted the story to climax at a big wedding social! To me, that seemed like the architecture of a truly Winnipeg story.

We started shooting on January 31, 2019, and it was a very difficult film to make. I was trying to achieve a very specific tone. I wanted it to be very authentic; with very real performances, but not too earnest; funny, but not broad comedy, either. It was hard to get it right, but I felt very supported by my cast and crew who worked really hard to help me achieve my vision.

PE: Is it based on a personal story (yours or someone you know)?

SG: The story starts with an encounter between a man and a woman, who have never met before. They decide that instead of getting to know one another, they will keep their names secret, and take advantage of the opportunity to share secrets with a complete stranger that they will never meet again. After an evening of sharing their darkest secrets with each other, they vow to never see each other again – except, of course, it’s Winnipeg.

This inciting incident is based on an encounter I actually had in South America. I met a Canadian who was backpacking through, while I was living there for two years, going to film school. We had this exact thing happen to us, except in the real story, we actually never saw each other again. I wonder what happened to her.

PE: The main actress and a few others are from the Filipino community, how was it working with these actors?

SG: It was amazing to discover the seemingly endless talent in Winnipeg’s Filipino community! At the very beginning of my writing process, I sat down with a number of Filipino friends to talk about their experiences going through the events about which I wanted to write. They were so open and generous in sharing their stories with me; it was incredible. I ended up going back to them a number of times while writing, to ask “did I get this right?” or “does this seem like something that might happen in a Filipino family?” They were so supportive. It was fantastic. I am very grateful to them. They are all listed in the end credits of the movie.

In terms of actors, at first, I couldn’t find very many at all. The usual casting directors in the city don’t have a lot of connections to actors in the Filipino community, which is too bad! So, I had to start searching in other places: I talked to Stephanie Sy, and she connected me with Andrea Macasaet, who, in turn, connected me to a bunch of other actors. We looked online and I cast my lead, Hera Nalam, based on her YouTube videos. We found our “Mom” and “Dad” actors through 204 Filipino Marketplace on Facebook. I talked to someone who had been a drama teacher at Sisler High School, and he connected me with his former students who were talented. I built a real web of people-connected-to-people to fill out the cast.

But now that I have discovered these great actors, I want to do more! Maybe a TV show or something. So much talent! And nobody seems to be camera shy; everyone I met was willing to take a swing at acting. I love it!

PE: The movie is primarily a romantic-comedy, but I believe there’s also a hint of family drama in the mix?

SG: It was important for me that my characters have a background – a family, a job, a goal in life. They need to be fully-flushed characters. My lead character is named Iris Dela Cruz and I was so happy with the scenes we shot with her family – played by Andrea Macasaet, Mel Hizon, Mithus Mallari, and Elmer Aquino – that they ended up taking more space in the final film than I had anticipated.

One of the themes of the film centres on Iris’s struggle to get her mother to accept her as an adult who is capable of making adult choices, and I really enjoyed the performances in those scenes, so they became centrepieces of Iris’s story.

PE: What do you want viewers to take away from the movie after watching it?

SG: The movie is funny and sexy and honest and emotionally intense. I want audiences to laugh, and be engaged and walk away having been told a good story. I want them to walk away feeling like they know my characters, that maybe they saw something of themselves in my characters. I also want them to walk away recognizing that our stories deserve a place on the silver screen, alongside stories from Hollywood and Bollywood. Just because we’re from Winnipeg, doesn’t mean we have to spend our lives watching stories from somewhere else.

PE: As a Canadian film maker, what usually are the challenges you face?

SG: Where do I start? The biggest challenge is publicity; finding a way to let people know that the film is in cinemas.

PE: Suggestions on how to overcome these challenges for you and other filmmakers in Canada?

SG: The average US film has a $35 million publicity budget. The average Canadian film has a few thousand dollars. I don’t mind if people know about my film, and choose not to see it, but it seems unfair that so many people aren’t able to make that choice because they don’t even know that our films are there!

PE: Any future projects we can look forward to?

SG: Yes! I am always developing new projects. I Propose We Never See Each Other Again After Tonight is my eighth film. I am presently writing a new thriller about identity theft. The more I research it, the more paranoid I become. I change all my passwords almost every day now. My wife thinks I am crazy.

(You can see trailers for Sean Garrity’s previous films at bedbugsfilms.com/trailers/ )

PE: Anything else you’d like the readers and viewers to know about you and your work, as a Canadian filmmaker?

SG: I would love people to come out and see the new film in the cinema. In the cinema, the sound is in 5.1 surround, the score (composed by local producer Murray Pulver) is mixed beautifully, the colours are right, and you can enjoy the film on a giant screen. It is the way the movie is meant to be seen.

I Propose We Never See Each Other Again After Tonight opens at the Cineplex Odeon McGillivray Cinemas on August 21.

Director Sean Garrity on a cold night shoot in Winnipeg