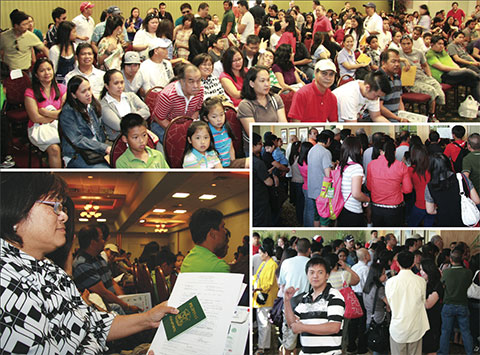 Despite the long wait, some managed to keep their sense of humour. “Hay, Naku! Consul-misyon talaga ang inabot namin dito,” said Rose, a Winnipeg Pinay who, after waiting for several hours, was told to visit the Consulate’s web site to inquire about dual citizenship. Photos by JP Sumbillo

WINNIPEG – Frustration levels were high as more than a thousand Filipinos waited in line to avail of the recent outreach services provided by the Toronto Philippine Consulate at the Canad Inns Garden City in Winnipeg.

Despite lining up as early as dawn on Saturday, July 9, some people wait many hours to renew Philippine passports or to process Special Power of Attorney (SPA) documents. Some were processed within five hours while some who arrived around 9:00 a.m. were still waiting at 10:30 that night.

There were volunteers ready to help the crowd but the huge throng of people waiting for service visibly overwhelmed them.

“There is a need to establish a Philippine Consulate office in Winnipeg, Manitoba… the number of new immigrants and contract workers from the Philippines has grown tremendously and outreach programs such as this is not enough any more,” said PCCM president Lito Taruc.

Taruc, also a broadcaster on CKJS Radio Winnipeg, opened the phone lines to listeners on the Good Morning Philippines program from Monday, July 11 to Thursday, July 14.

“Listeners called in to express their frustration on air… many of them complained that they waited for more than 12 hours on Saturday only to be sent home… when they came back the following day (Sunday), nag-iba na ng sistema [the system was changed] and they had to wait again for many hours… I have with me a letter of complaint signed by over 200 frustrated Pinoys,” related Taruc to Pilipino Express.

According to Sally Soriano, adviser and founder of the Pangasinan Group of Manitoba (PGM), “Consul General Pedro Chan visited us during our picnic at St. Vital Park (on July 9th) and assured us that he would personally talk to DFA (Department of Foreign Affairs) in Manila… because there is a need for a Philippine Consulate in Manitoba… manned by career staff from the Philippines.” Soriano added that many new PGM members were not able to attend their summer picnic because they were at the Canad Inns Hotel waiting in line to get their Philippine passports renewed.

Taruc confirmed that Consul General Chan saw the problem and assured him that they will conduct the next outreach program at the PCCM and that they will, “…try their best to be more organized and systematic…” in response to the public’s complaints.

“There was a Philippine Consulate in Winnipeg in the early 1980s… the office was on St. Mary Avenue downtown,” said Soriano. She told Pilipino Express that the Consul General at the time was Mr. Leovigildo Anolin with a group of career staff such as Assistant Consul Milagros Perez and Finance Officer Generosa Balocating (now with the Phillippine Consulate in Berlin), among others.

“The office was open every day and they were very efficient in serving our needs at that time… unfortunately, they had to close the office because of the Philippine government’s cost-cutting… and at that time, most of the Filipino immigrants had become Canadian citizens and did not need their services as much as when they were new here (in Winnipeg).