WINNIPEG – Two former political prisoners of the Arroyo administration were in Winnipeg on Wednesday, April 11 to raise awareness about human rights violations in the Philippines. Dr. Merry Mia-Clamor, who was held for 10 months and Ms Angelina Bisuña Ipong who was held for six years, spoke about their torture, sexual harassment and physical abuse while in prison.

The two were part of a three-week, cross-Canada tour with United Church of Christ in the Philippines (UCCP) General Secretary, Bishop Reuel Marigza. The group held a public event at Sam’s Place Restaurant on Henderson Highway, speaking to community, church and labour groups.

Bishop Marigza and the UCCP have initiated a legal case to hold former President Gloria Macapagal-Arroyo and other top military officials legally accountable for perpetrating human rights violations in the Philippines. They recently met with government officials in Canada and the US and testified to the sub-committee on International Human Rights in parliament earlier this month.

This recently concluded Canadian tour is part of an international effort organized in preparation for the upcoming United Nations Universal Periodic Review (UPR) session in May. The human rights record of the Philippines will be under examination and member states to the UN, such as Canada, will have the opportunity to recommend remedial action. 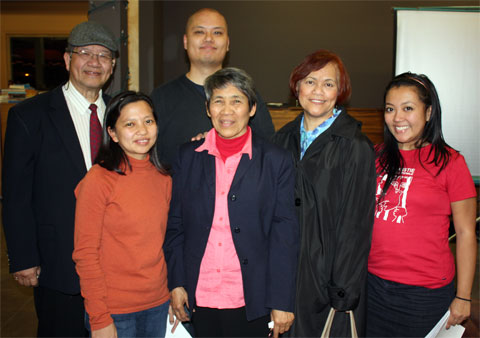 Have a comment about this article? Send us your feedback