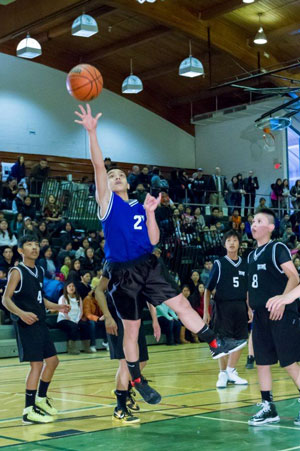 The 2012-13 season of the Winnipeg Athletic Association for Youth (WAAY) came to a close Sunday, March 10, 2013. The playoffs were filled with upsets as lower-ranked teams rose to the challenge and showed off their basketball talents to the enthusiastic appreciation of the full capacity crowd at Tec Voc High School gym. Family, friends and fans were treated to two heart-stopping games. Both the Jr. Tykes and the Bantam/Midget championship finals were won by just one point in the last seconds of each game.

The Jr. Tykes White team, coached by Debbi Purganan, was in third place after the regular season play. They upset the second placed Red team to find themselves in the finals against the undefeated Black team, coached by Jomar Guaring. The outcome seemed predictable when Black took the early lead. As the minutes ticked down, White rallied back and the points seesawed between the teams. At the final buzzer, White had pulled an upset and gave Black their only loss of the season!

The crowd’s heart rates barely returned to normal when the Bantam/Midget finals got underway. The drama began one week earlier when the first place Orange and second place Yellow were both upset by the fourth place Royal Blue and third place Black teams respectively. Having lost to the Black during the regular season play, the Royal Blue team, coached by Jun Urbano, quickly put points on the board with their aggressive play. The Black team, coached by Jai Mendez, roared back in the second half and Royal Blue’s 15-point advantage disappeared.

Congratulation go to all the boys and girls who played their hearts out to make the 2012-13 WAAY basketball season such a memorable one; and to the organizing committee, canteen crew and game officials for making it all possible.