World Sikaran Tournament: are you ready? 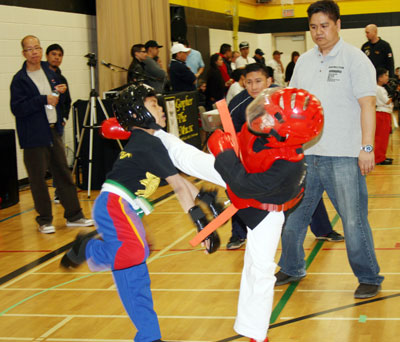 On March 9, 2013 the Sikaran Arnis School of Martial Arts hosted the 32nd Annual Sikaran Arnis tournament at Leila North Community School. The event was a huge success as friends, families and participants from numerous martial art schools from Alberta, Saskatchewan, Ontario and Manitoba gathered for the event.

Guro Dante Alambra and his team of volunteers, which included past and present martial artists, used this event to prepare for the 4th World Sikaran Tournament to be held in May 2014.

The gym was in a buzz all day as spectators and competitors alike had the opportunity to watch Traditional Sikaran Laban (Sparring). According to Richard Parinas, “what makes Sikaran Laban unique is it follows rules that were set in the 1800’s by Filipino farmers as their past-time sport.”

From child to adolescent to adult, boy or girl, this tournament proved that there is always room to learn an art that encapsulates and captivates the mind, body and soul. Well done and good luck at the Worlds Tournament! For more information, visit www.sikaranarnis.net.