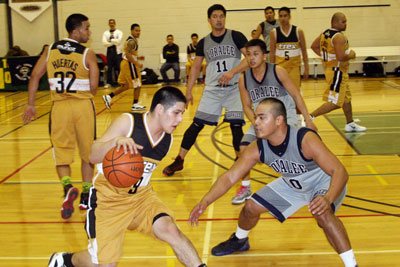 Forty-seven is the number of teams the IKAW league has grown to in the 2012-2013 season. With four divisions – Open, 39 plus, 48 plus, and kids – the league is set to entertain families and friends.

On January 6, 2013, the opening ceremonies were held for IKAW’s 21st season. Commissioner Jerry Medina addressed the crowd and special guests and reminded everyone to “avoid hard flagrant fouls and to remember the motto of being a “good sport.”

The setting at Tec Voc High School was filled with volunteers, sponsors, athletes, friends and families as they were treated to renditions of both national anthems and the proclamations of Miss IKAW, best uniform and the Oath of Sportsmanship.