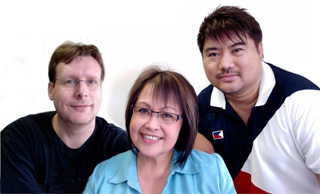 We are The Pilipino Express Inc., a Manitoba-based company that was incorporated in 2005.

We publish the Pilipino Express News Magazine twice a month, catering to the communication needs of the growing Filipino-Canadian community, not only in Manitoba, but also in other Canadian provinces.

We aim to keep long-time Filipino-Canadians in touch with their heritage while helping new arrivals in their efforts to adapt to their new homeland.

We feature respected columnists and authors from Canada, U.S. and the Philippines who provide evocative and provocative opinions and literary articles in both Filipino (Tagalog) and English.

We are proud to have a highly qualified editorial and creative team. We are deeply involved not only in the Filipino community but also in the Canadian community at large.

Born, raised and educated in the Philippines, Emmie earned her Bachelor of Arts degree in Broadcast Communication from the University of the Philippines (Diliman). She was Operations Director of the Broadcast Media Council (BMC), Kapisanan ng mga Brodkaster sa Pilipinas (KBP) and the Popular Music Foundation of the Philippines, which produced the MetroPop song festival in the late ‘70s and early ‘80s. She also held the post of Public Relations Manager for the multinational advertising agency, McCann Erickson (Philippines) until she immigrated to Canada in 1988.

In Winnipeg, Emmie produced and co-hosted the daily morning drive-time show, Good Morning Philippines on CKJS Radio 810 AM. She also produced and hosted the daily weekday afternoon show, Manila Sound and the Saturday show, Tunog Pinoy Pang Sabado. After almost 15 years in radio broadcasting, Emmie left CKJS in December 2003 to serve as Special Assistant for Communications for then-Federal Minister of Western Economic Diversification, the Hon. Dr. Rey Pagtakhan. She also had a brief stint as Executive Assistant to then-Deputy Mayor and Councillor Mike Pagtakhan at the City Council in 2005.

Emmie was a recipient of both the Queen Elizabeth II Golden Jubilee Medal in 2002 and the Queen Elizabeth II Diamond Jubilee Medal in 2012 for media and community service. She was also a nominee for the YM-YWCA Women of Distinction Award in 2004. Emmie was a board member of the Citizenship Council of Manitoba and the Community Unemployed Help Centre, and a member of the Federal Advisory Committee on Judicial Appointments (Manitoba) in 2002-2003. She also served as Ambassador for the Nayong Pilipino Pavilion in Manitoba's annual Folklorama festival in 1998 and 2008.

Mainly self-taught, Paul reads, writes and speaks the Filipino national language fluently. He maintains his own web site, Sarisari etc., which is devoted to Filipino history, language and culture, and he is often consulted for his knowledge of pre-colonial Filipino writing.

Throughout the 1990s, Paul was the production engineer at Winnipeg's multicultural radio station, CKJS Radio 810 AM where the Filipino shows dominate the programming. He has also worked as a free-lance technical co-ordinator and consultant for local concert promoters and performers such as Sharon Cuneta, Regine Velasquez, Freddie Aguilar, Jaya, Pilita Corrales, Randy Santiago, Martin & Pops and many more. He has engineered and produced many recordings for local singers and is a musician in the local band, Elesi.

Currently, Paul works in the film industry as a sound editor. Some of his many credits are listed at IMDb.com.  In 2005, Paul joined his friends, Rey-ar Reyes and Emmie Joaquin at The Pilipino Express Inc. and began publishing the Pilipino Express News Magazine. Apart from his editing duties, he also writes a regular column, In Other Words.

Rey-ar’s foundation in graphics design started with his training in Architecture at Far Eastern University in Manila. His years of experience working as Art Director at leading creative shops in Manila, the Olbes Brothers’ Unit One Design and later with Olbes, Ogilvy & Mather (O&M) Philippines honed Rey-ar’s knowledge and skills in concept design, art direction and execution.

He immigrated to Canada in 1993 and worked at the O&M office in Toronto until he decided to move to Winnipeg in 1994.

He has been one of the most sought-after graphic artists (and singers) in Manitoba, having provided creative services to various organizations and several community publications in the 1990s and early 2000s. In 2005, he joined his friends, Paul Morrow and Emmie Joaquin at The Pilipino Express Inc. and began publishing Pilipino Express News Magazine.

Now the Creative Director of Pilipino Express, the visual content of the newspaper is clearly Rey-ar’s. He also operates his own graphics design studio called Disenyo Graphics and he promotes entertainment shows for the Filipino-Canadian community.