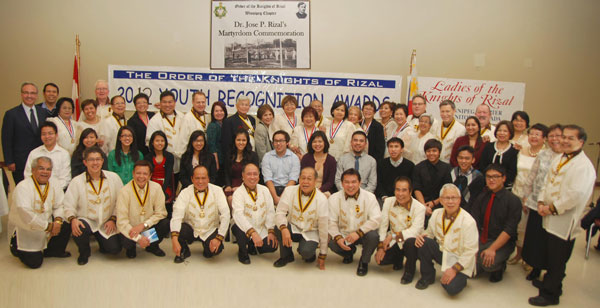 In remembering Dr. Jose Rizal, one will likely remember his thought, “the youth is the hope of the motherland.” Rizal believed that education is what our people need to be free from oppression, ignorance and poverty. Our parents and grandparents understood his thinking and worked hard to educate us, the youth of Rizal’s hope. In Winnipeg, the Knights of Rizal Winnipeg Chapter (KoR-W) encourages our youth by recognizing their success in studies through our Youth Recognition Awards (YRA). This year there are seventeen honour students who received the YRA awards. The Knights of Rizal congratulates the recipients and their family for a job well done. May you be given the blessings necessary to succeed in your future endeavours.

The 2012 Youth Recognition Awards Recipients are:

“The story of the Philippines’ national hero, Dr. José Rizal, and his family, is representative of the courageous spirit and moral intellect, the sublime quality of leadership, that makes possible the emergence of an independent nation from colonialized, disunited or economically looted territories. Rizal’s life and works, like those of Mohandas Ghandhi, catalyzed anti-colonial politics in Asia during the latter years of the 19th century. Dr. José Rizal is rightly referred to as “the First Filipino,” and to this day, he stands as a challenge to Filipinos still struggling to overcome the legacy of four centuries of Spanish imperialism and 100 years of American occupation and control.

“Rizal can be classed as a universal genius. He dedicated himself to the education of his countrymen. In pursuit of this task, he mastered languages, wrote poetry, and investigated many scientific fields outside of his formal training as an ophthalmic surgeon. He travelled widely, wrote extensively on many subjects, and even translated Friedrich Schiller’s Wilhelm Tell and Hans Christian Andersen’s fairy tales into Tagalog. His crowning achievement would be the two novels that he wrote while in Europe. These Spanish texts, Noli Me Tangere and El Filibusterismo, unleashed a series of incidents that would overthrow the Spanish occupation and lead to the recognition of the Philippines as a nation.

“However, the singular act of Rizal that gave birth to this new nation was his martyrdom.”

The announcement also included the extension and road twinning of Dr. Jose Rizal Way all the way up to the new extension of the Chief Peguis Trail. Also, a nearby neighbourhood green space at the corner of Sewa Crescent and Khalsa Street will be named Dr. Jose Rizal Park.

The Chapter Commander Felino de Jesus of the Knights of Rizal Winnipeg Chapter on behalf of the Rizal Memorial Committee and the Knights of Rizal membership extend their heartfelt appreciations to Sir Councillor Mike Pagtakhan, Councillor Devi Sharma, Councillor Ross Eadie, Mayor Sam Katz, the City of Winnipeg Council and their staff for their hard work and support for the above projects. A special note of gratitude also goes to Lombard North Developments for their generosity to cover the costs of production and installation of the statue, estimated to be approximately $225,000.