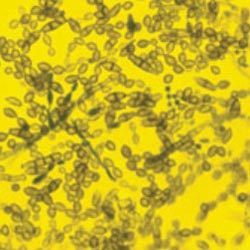 A family of a new-immigrants and a University of Manitoba student, Roan (not her real name), recently moved out of their rented apartment because of various health complications due to mould. They reported the issue to the landlord, but their request to remedy the situation was ignored and they were only told to use a humidifier. After two years of battling diarrhea, colds, flu, and skin diseases, they finally decided to move out of the mould-laden apartment and purchase a home in May 2016.

Mould is a part of the natural outdoor environment. It breaks down dead organic matter, such as fallen leaves and dead trees. However, mould growth should be prevented in the indoor environment. Moulds reproduce by means of microscopic spores that float through outdoor and indoor air. Mould may grow indoors when these spores land on wet surfaces such as wooden window jambs, ceilings, and walls. Moulds only grow in the presence of water or moisture. If the wet areas are dried within 24 to 48 hours after a leak or spill, in most cases, mould will not cultivate.

Just as Roan’s family experienced, mould have the potential to cause health problems because it produces allergens, irritants, and mycotoxins. Physical contact with mould may cause allergic reactions in sensitive individuals whose responses may include sneezing, runny nose, red eyes, and dermatitis. Mould can also trigger asthma attacks and can irritate the eyes, skin, nose, throat, and lungs of both mould-allergic and non-allergic people. Dead mould might still cause allergic reactions in some people, therefore it is not sufficient to just kill the mould; it must also be removed completely.

You may be suspicious of hidden moulds if your home smells mouldy but you cannot see the source, or if there was a recent water damage. Mould may be concealed in locations such as the underside of carpets and pads, the backside of drywall, the top-side of ceiling tiles, inside walls around leaking or condensing pipes, the surface of walls behind furniture, inside ductwork, and in roof materials above ceiling tiles.

Inspecting hidden mould problems may be challenging and will require attention when it involves disturbing potential sites of mould growth. If you suspect that you may have a hidden mould problem, consider hiring an experienced mould remediation professional.