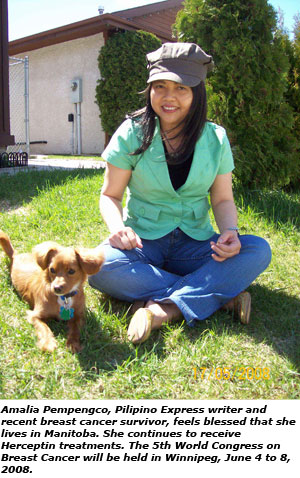 “I have a very fast growing and aggressive breast cancer,” said Leslie Cowan, who travelled to Buffalo, N.Y., for Herceptin treatments. Cowan said she was willing to pay $100,000 US for the drug.

“This drug, Herceptin, attacks that genetic mutation and extensively reduces the risk of recurrence by 50 per cent. So to me, this is a miracle drug,” said Cowan in an interview with CBC news.

In the Philippines, where cancer is the fourth leading cause of death and breast cancer the number one cancer affecting women, patients cannot expect the same kind of institutional support.

Each chemotherapy session in the Philippines costs around 50,000 pesos, enough reason why we Filipinos living in Manitoba should be thankful.

The 5th World Congress on Breast Cancer will be held right here in Winnipeg on June 4 to 8, 2008. As this author can attest, Winnipeg offers exemplary treatment and care for its breast cancer patients.