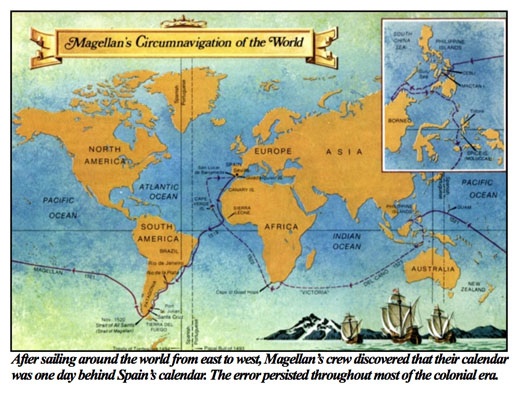 The celebration of the New Year in the Philippines has all the noise and mayhem this year as it usually does, but there was one year when December 31 really was cancelled. In 1844, the last day of the year was skipped to correct a problem that had persisted for 300 years.

It is a little known fact about Philippine history that the date for any given event during most of the colonial era is technically wrong. That’s because the Philippine calendar was out of sync with the rest of the world by one day – the parts of the world where the Gregorian calendar was used, that is. The mistake was a result of the route that Spanish ships travelled to get to Asia.

An edict of Pope Alexander VI in 1493 drew a line down the middle of the Atlantic Ocean that divided the world for conquest between Spain and Portugal. All the lands to the east of the line were awarded to Portugal while everything to the west was for Spain. Not satisfied with having most of the Americas, Spain still wanted to have access to the valuable spice markets of Asia. So, to avoid their Portuguese rivals, the Spaniards had to travel west to get to the Far East.

During their westward voyages to the Philippines, Spanish sailors of the 1500s naturally counted their days from the date when they left Spain, but they did not take into account the rotation of the Earth. Since they were, in effect, “chasing the sun,” each day was slightly longer than 24 hours. Each sunrise and sunset was a little later every day but, without accurate clocks (they used sand-filled hourglasses), they were unaware of this happening. As they travelled farther and farther west, their shipboard day was gradually shifting toward “tomorrow.” By the time they got to the Philippines, more than halfway around the Earth, they had gained more than half a day – about 17 hours – without knowing it. However, their calendars still showed the date as though they were still in Spain.

This phenomenon was first noticed on Ferdinand Magellan’s expedition to Asia, but only after the few survivors of his fleet had almost completed the first ever voyage all the way around the world. Antonio Pigafetta, an Italian chronicler, kept scrupulous records of the entire three-year voyage, as did one of the pilots, Francisco Alba. When their ship Victoria stopped for supplies at the Cape Verde Islands off the west coast of Africa, they were sure that the date was Wednesday, July 9, 1522, but, to confirm the accuracy of their records, they asked one of the locals the date. They were very surprised when he told them that it was really Thursday, the 10th. They had travelled a whole day longer than their records showed.

If Magellan’s crew had had a clock with them, they might have noticed that they were constantly adjusting it backward in order to keep its 12:00 noon in sync with the sun at its highest point each day. Eventually they would have turned it back a full 24 hours by the time they got home.

Losing track of a whole day worried Pigafetta and some of the crew when they realized that they had violated their faith by eating meat on Fridays and observing Easter and the Sabbath on Mondays. However, the date shift was not much of an issue in the Philippines during most of the Spanish era because the colony had very little contact with countries other than Spain. Very few people circumnavigated the globe and most who returned to Spain went back eastward, so the effect was reversed for them. The confusion only arose when the Philippines opened up trade relations with its neighbours whose calendars were brought by other European nations that had come to Asia travelling eastward. For them, Asia was only seven hours ahead of Western Europe, not 17 hours behind, so the adjustment did not affect their calendars. Eventually even Spaniards were able to make the eastward journey to the Philippines and some of them found it absurd that the date in the Philippines was a day behind everybody else.

The man to straighten out the mess was the new governor of the Philippines in 1844, Narciso Clavería, whom some may remember from an earlier article as the governor who made family names mandatory for Filipinos with his Alphabetical Catalogue of Surnames.

Clavería was a very practical, rational and meticulous man with a passion for order – a real micromanager. Apart from giving surnames to all Filipinos, he also rearranged the boundaries of many provinces to make governing them more efficient. He made the election of certain officials fairer and he untangled many of the useless and contradictory laws that had been passed over the centuries.

One of the first problems that Clavería addressed when he arrived in the islands in 1844 was to fix the Philippine calendar. After consulting with Manila Archbishop José Seguí, Clavería issued a decree on August 16, announcing that Monday, December 30, 1844, would be followed immediately by Wednesday, January 1, 1845.

There was a New Year’s Eve, of course; there was just no December 31 in 1844. Since then, the Philippines have been in sync with the rest of Asia – on the calendar, at least.

Visit Sarisari etc. for more about Filipino history and language.