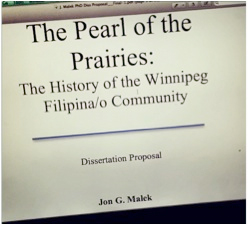 Very recently I submitted a proposal for my PhD dissertation. This is something that all doctoral students go through as they work towards their degree, and it often requires the student to defend their work to a committee of faculty members in their department. My research is on the Winnipeg Filipino community and a major interest for me is the personal and shared experiences that Filipinos in Winnipeg have had. The title of my work is The Pearl of the Prairies: The History of the Winnipeg Filipina/o Community. I have been asked about this choice of title, in particular the use of “Filipina/o.” Why not Filipino? While Filipino and Filipina are gendered terms adopted from the Spanish language, the term Filipino has today come to refer to the collective body of those who share a Filipino heritage and ancestry. When I write in an academic context (like a journal or my dissertation, for example), I chose the term Filipina/o because it emphasizes that men and women can have different experiences of immigrating and integrating into Canadian society. But is this more important than using the singular term “Filipino” to refer to unified group of men and women with a shared national and cultural heritage? I think so, depending on the context, and I’ll explain why.

I first want to express that the use of the term Filipina/o does not indicate any inequality, but rather to acknowledge that, in some aspects of life, men and women experience things differently. Despite differences in experience, though, the equality of men and women is not in question. In an academic context, quite a few recent authors writing on Filipinos living in North America have adopted the term “Filipina/o” (but, at the same time, many continue to use “Filipino.”) This reflects a body of feminist writing that is concerned particularly with the lives of Filipino women (sometimes this literature is called “Filipina feminism” or “Peminism”).

In a global context, temporary labour migration is often gendered, that is, men and women typically fill common jobs. For example, while many Filipino men from the Philippines work abroad as seamen or seafarers, many Filipino women work in occupations such as domestic or care workers. According to the Philippine Overseas Employment Agency (POEA), in 2010 96,583 domestic helpers and related household workers were working abroad, of which 94,880 (98%) were women. In the same year, 347,150 seafarers were deployed (the POEA doesn’t note how many are men, but the vast majority, if not all, are men). Furthermore, while society ideally strives to treat men and women equally, differences do remain; sometimes they are inequalities in the work place, and sometimes they are different roles that men and women have in society and in the family.

While acknowledging this, though, the term Filipina/o does acknowledge that there are many shared experiences. I admit that sometimes I am uncomfortable using the term, as it seems to create an imbalance between Filipinos and Filipinas, however, when I am writing in a context that is sensitive to different experiences and how daily life and society can affect those experiences, the term “Filipina/o” seems more appropriate. As I said above, a number of recent books take this approach as well. Indeed, a book published at the end of 2013 studies the experiences of Filipino women in Canada exclusively, and a book published by the University of Toronto also adopts the use of Filipina/o. This term is also popular with American-Filipino authors. This question of Filipino vs. Filipina/o is one peculiar to the Filipino language’s Spanish influence. Other nationalities that have such a Spanish heritage also experience similar questions. A few years ago, a student at the University of Manitoba (where I work as a writing tutor) told me that, in her country, the term “Latin@” was used to refer to both Latinas and Latinos, while emphasizing the different experiences of men and women.

As I said earlier, though, this is dependent on the context. In daily, common usage, or even when speaking, Filipina/o can be more complicating – especially trying to say it! But there is a case to be made, as many have, that it is important to acknowledge different experiences that men and women have, while negotiating the fact that many experiences are in fact shared, and work towards building a common Filipino community. This use of Filipina/o is a matter of choice, of course, and I would be very interested to hear what members of the community think of this!

Jon Malek is a PhD candidate in History at Western University, and an alumnus of the University of Manitoba (B.A., M.A. in History). As part of his research project on the history of Filipinos in Winnipeg, Jon would be happy to talk to members of the community about their life experiences. He can be contacted at jmalek7@uwo.ca