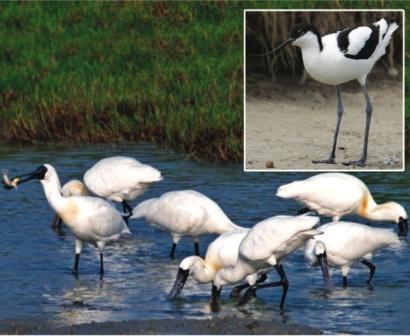 PHILIPPINES – Two rare species of water birds were spotted for the first time at the Candaba Swamp in Pampanga during the annual Asian Waterbird Census on January 14. According to Michael Lu, president of the Wild Bird Club of the Philippines (WBCP), the last nearby sighting of the black-faced spoonbill, one of the rare species, was along Manila Bay in 1914, although there were other sightings in Batanes and Palawan.

Another rare water bird spotted for the first time in the Candaba swamp was the pied avocet. It was last seen at a Cavite lagoon in 2005.

The two species are originally from Mainland China and usually spend the winter in Taiwan. Carmela Española, a biologist from the University of the Philippines speculated that recent cold weather in Taiwan might have caused the birds to move further south.

“Siguro talagang malamig ang winter ngayon doon kaya, lumipat sila dito. (Maybe this winter has been too cold there, so they moved here),” she said.