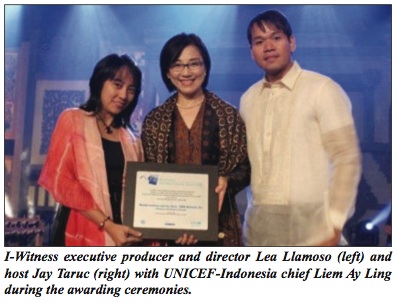 GMA is proud to announce that I-Witness’ Jay Taruc and his team have won the 2008 ABU CASBAA UNICEF Child Rights Award.

Out of 69 entries from 10 countries in Asia, the documentary Batang Kalabaw (Child Beasts of Burden) was chosen for the prestigious award this year for being “the best television programming on children’s rights produced in the Asia-Pacific region.”

Batang Kalabaw tells the story of 14–year old Cherilyn and her young friends who trek up and down the mountains of Agusan del Sur for more than 6 hours to carry logs weighing as much as 15 kilos. Cherilyn is the sole breadwinner of her family and acts as a parent to her five siblings.

This is the second I-Witness episode that won this award following the episode Selda Inosente (Angels in Prison) hosted by Kara David that won in 2003. 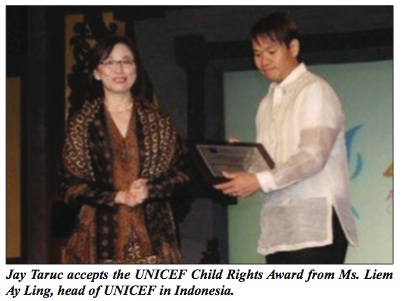 The documentary had also previously received a Certificate for Creative Excellence at the 2008 US International Film and Video Festival and the 2008 Catholic Mass Media Awards.

Jay Taruc is the son of top-rated Philippine broadcaster Joe Taruc and the nephew of PAM president and CKJS Radio’s newscaster Lito Taruc.

The awarding ceremony was held on November 24 in The Westin Resort in Bali, Indonesia.