MANITOBA – “Caring, sharing, daring… to give until it hurts should be the comfortable benchmark for all…” was the gist of former President Fidel V. Ramos’ appeal to hundreds of Manitobans who attended the GK Heroes’ Night with FVR at the Fort Garry Hotel on Sunday, October 26.

“On the invitation of GK’s Tony Meloto, our Ramos Peace and Development Foundation (RPDEV) is partnering this week with ANCOP International Canada in three major cities Toronto, Winnipeg and Vancouver – to raise funds from among Filipino-Canadian communities for GK’s projects. ANCOP, which stands for “Answering the Cry of the Poor”… is GK’s major international network that taps into the longing of Filipinos overseas to do something for the suffering of the poorest of the poor in their Philippine motherland,” said FVR.

During the press conference held shortly before the GK Heroes’ Night program, FVR emphasized that overseas Filipinos must be “practical” in giving. He urged them to send cash donations instead of second-hand or used goods that “only find their way to the ukay-ukay [second hand] retail shops back home.” He emphasized that sending money over is definitely more cost efficient than sending used goods. Besides, according to FVR, there are already government institutions in place to take care of cash contributions; to track down and pay huge sums of money for freight is not within the purview of these institutions.

Winnipeg’s Vic Lopez, overall chair of the Winnipeg GK Heroes Night event, and his team of hard-working ANCOP-GK volunteers, made sure that the event highlighting FVR as guest speaker was well-attended and highly publicized to maximize financial donations for Gawad Kalinga’s projects from Winnipeg’s Filipino-Canadians and friends of the community.

In addition to the GK Heroes’ Night, the indefatigable former president also spoke at an early breakfast fund-raiser for the benefit of the Philippine Canadian Centre of Manitoba (PCCM) on October 27 at the Fort Garry Hotel. Winnipeggers paid a generous $150 per plate to the fund-raiser organized by Larry Vickar of Vickar Automotive Group.

During the PCCM breakfast event, FVR engaged everyone with his wit and humour. He jokingly declared that he and his wife Ming Ramos are now also dual citizens, “Filipino citizens and Senior citizens.” He fondly teased Manitoba Premier Gary Doer by repeatedly referring to him as “Gary THE Doer!” 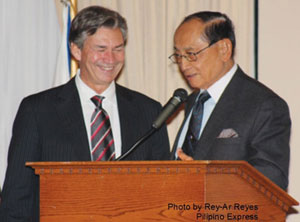 In response to FVR’s genial banter, the premier showed the audience the cigar that FVR gave him as they were seated at the breakfast table and said, “His cigar is the best!” He later joked that holding the cigar in public may “haunt” him at the Legislature, “Please don’t ask me about healthy living…” he chuckled as the audience laughed.
FVR also auctioned a box of his famous Tabacalera cigars (to benefit GK), which was brought home by the one and only bidder, Larry Vickar, for $500.

FVR was fully booked during his two days in Winnipeg – he also attended a round table meeting at the University of Manitoba’s Mauro Centre for Peace and Justice that was arranged by Dr. Pagtakhan. 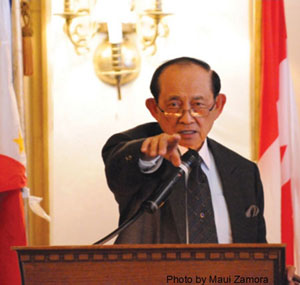 Premier Gary Doer: “In Manitoba we cherish our diverse cultural heritage in which our Filipino community plays such an important role,” Premier Gary Doer said. “It was an honour to welcome former President Ramos and his delegation on their visit to Manitoba and to celebrate the strong ties that exist between his country and our province. We will continue to build our friendship with the Philippines and leaders like President Ramos.”

Larry Vickar: “At a reception held at the Canadian Ambassador to the Philippines home in Manila, I had the distinct pleasure to meet our guest speaker – Former President Ramos. I suggested he should make, what would be his second trip to Winnipeg, to help in some way to sustain financial support for the financially struggling PCCM. His response, with an unlit cigar in his hand was immediate, ‘Invite Me!’ While it was Vic Lopez’s Gawad Kalinga that did the inviting, we do appreciate them and the former President allowing our fundraising committee to “secure” him for this event and for our Premier Mr. Doer coming through with his part as he indicated he would right from the beginning in Manila.”