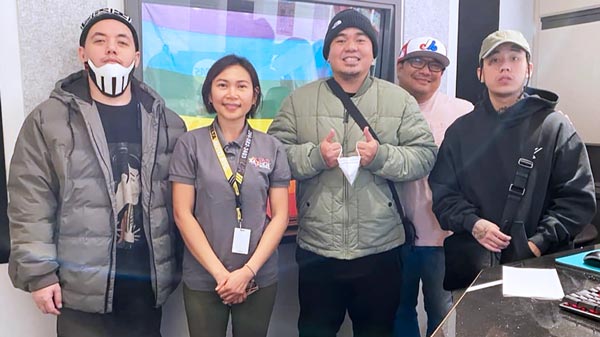 Two popular rap artists from the Philippines recently visited Winnipeg for a one-night concert at Petrus Hall on November 25.

Aristotle Pollisco, known professionally as Gloc-9, is an award-winning Filipino rapper, singer and songwriter. Since launching a solo career in 2000, he has spawned hits such as Simpleng Tao, Love Story Ko, Hari Ng Tondo, Sirena, and others. He has also collaborated with other major OPM artists like the late Francis M for Lando, Noel Cabangon and Champ Lui Pio with Sari-Saring Kuwento, to name a few. His songs resonate with social and political issues as well as Filipino values.

During their morning visit on 92.7 FM CKJS on November 24th, Gloc-9 said his songs “aim to make people think and not just listen.”

Meanwhile, Sean Patrick Ramos, known professionally as Shanti Dope, is an up-and-coming Filipino rapper, singer and songwriter. He started writing verses when he was 12, inspired by local rap artists who use song writing as a way to tell stories. Now at 21, he is behind popular songs Nadarang, MAU and Amatz.