Filipino-Canadian Eric Bauza is the new voice of Bugs Bunny 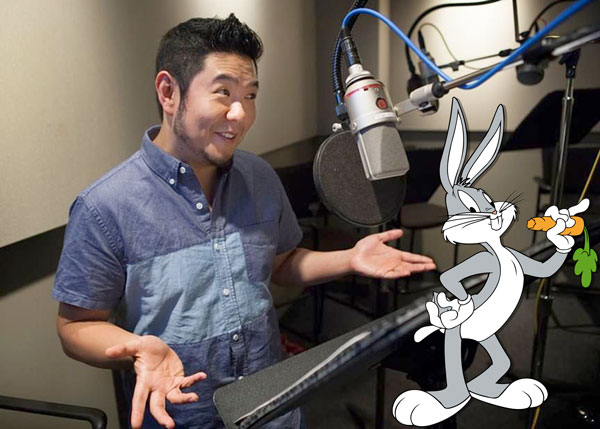 Scarborough, Ontario native Eric Adrian Bauza landed a prestigious job in 2020. He became the newest official voice of Bugs Bunny, one of the most beloved cartoon characters of the past 80 years.

The 41-year old Filipino-Canadian, who currently lives in Los Angeles, debuted as the voice of Bugs Bunny earlier this year in the HBO Max show, Looney Tunes Cartoons produced by Warner Bros. Animation. He recently completed voice recordings for Space Jam: A New Legacy, a sequel to the 1996 hit film, Space Jam.

Bauza is only the seventh person to take on the role of Bugs since the legendary Mel Blanc debuted as the bunny in the 1940 cartoon short, A Wild Hare. A role he held until his death in 1989.

A former stand-up comedian, late-night host, and animation artist, Bauza has been making voices since his early school days when he would get in trouble for doing impressions of his teachers and cartoon characters. He attended Cardinal Newman Catholic High School (now St. John Henry Newman) in Scarborough from 1993 to 1996, then Centennial College from 1996 to 2000.

Bauza became a full-time voice actor in 2007 and landed his first Looney Tunes gig as Marvin the Martian about 10 years ago. Since then he has voiced many of the most popular Warner Bros. cartoon characters including Daffy Duck, Elmer Fudd, Sylvester the Cat, Tweety Bird, Yosemite Sam, Foghorn Leghorn, Wile E. Coyote, Roadrunner, Pepe Le Pew, Barnyard Dawg, Speedy Gonzales, Tazmanian Devil and even Granny.

Outside the Looney Tunes universe he has also voiced characters such as Stimpy on Ren and Stimpy, Rudolfo Rivera/White Pantera on El Tigre: The Adventures of Manny Rivera, Foop on The Fairly OddParents, Lord Stingray on Superjail!, Chairman Drek from the 2016 Ratchet & Clank game, the Beagle Boys on DuckTales, Master Frown on Unikitty! Flip Champion on Ballmastrz: 9009 and Leonardo in Batman vs. Teenage Mutant Ninja Turtles.