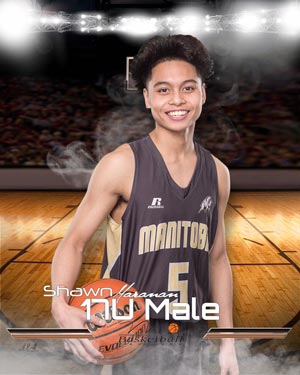 Canada Summer Games 2017 is in full swing in Winnipeg, with homegrown athletes giving strong and steady performances. Among them is Team Manitoba’s 17U basketball team, which won its first game Saturday night, at Qualico Sports Centre against Team Nova Scotia. The ‘Toba team was energized by the cheers of excited supporters from beginning to end. It was a close game but Team Manitoba triumphed in the end, scoring 88-83.

Setting the pace for his teammates is 17-year old Shawn Panaligan Maranan, the only Filipino-Canadian on this year’s roster. As the team’s point guard, Shawn says it’s his responsibility to get the team as involved as possible in the game.

“Part of our preparation is practicing two-and-half hours every day for the past two months. We’re so ready to play, especially on our home turf.”

Shawn has been in the provincial development program for two years and represented Manitoba at the national championships in Halifax. This is his first Canada Games.

The Manitoba Provincial Team Program is the premier player and coach development program in the province. The program attracts top players and coaches to represent Manitoba at national and international events. Ages 15U and 17U are offered to both male and female players and the program operates annually May through late July.

Shawn has been a point guard since he started playing basketball when he was about five years old in Winnipeg’s Philippine Basketball Association. His dad, Ruel Maranan said he saw his son’s potential when at two years old, Shawn would often play with his basketball.

“He really liked playing with a basketball. He didn’t like to play with toy cars or any other games. Even with video games like the Play Station. It was always basketball.”

“Basketball means everything to me,” Shawn said. “I believe it shaped me to be the person I am today. It has benefitted me a lot. And hopefully I can continue to play as I get older.”

When asked if he dreams of making it to the big leagues someday, like in the NBA or PBA (Philippines), Shawn says for now, he just wants to continue playing basketball after high school. He advises other kids though, to “focus really hard on what you do, not only in basketball but in school. Just keep working hard. I’m doing pretty good in balancing basketball and school.”

Team Manitoba played against Team Ontario on Sunday, and will face off with Team Alberta on Tuesday.