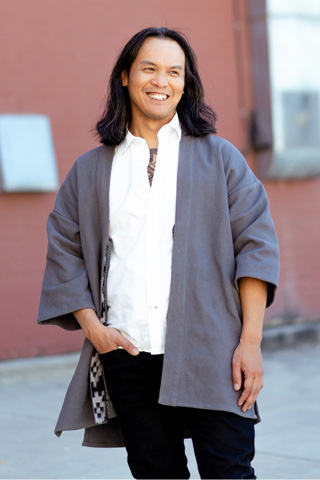 Editor's note: Jim Agapito hosts Recovering Filipino, which airs nationally Mondays at 11:30 a.m. on CBC Radio One, 990 AM and 89.3 FM in Winnipeg. The following is an interview conducted by Lucille Nolasco (PE) with Jim Agapito (JA)

Having a bit of crisis with your cultural identity? You are not alone. Filipino-Canadian writer and filmmaker Jim Agapito is on a quest to redeem himself and take back what he seems to have lost, with the help of family.

This is his story.

PE: Tell us about your childhood. Did you grow up in a typical Filipino family?

JA: I would say yes – “kinda” – in a sense that my mom and lola (she lived with us until I was 15) followed many traditions. However, being the rebellious child that I was, I pretty much didn’t follow them as a teen. I know it bothered the family as I didn’t eat much of the Filipino food they cooked, and I wasn’t the most “churchy” person. Mom and Lola still loved me, but I know it bothered them. I’m sorry again fam.

PE: What language did you use mostly at home?

PE: Did you like eating Filipino food? Your favourite? Least favourite?

JA: No! I don’t eat a lot of Filipino food because of seafood allergies! However, I love almost all desserts and lumpia is my favourite! Least favourite is anything with seafood and dinuguan.

PE: Have you experienced being or feeling “different” in school, because of your being a Filipino? What did you do about it?

JA: It depends. I went to a private catholic school from kindergarten to Grade 8. A majority of my classmates were Filipino. However, when I went to a private high school for some time, I experienced it. There was a class war. I come from an immigrant family that worked hard to come to Canada and give a better future for their children. (I was born in Canada). So, classmates didn’t have an idea how hard my family worked to provide for us because they came from very privileged, white families.

But it also didn’t come with my struggle with my Filipino peers. Although I loved hip-hop, R&B and pop, I gravitated toward heavier music such as rock, metal and punk. (Thanks Tito Bong). Other Filipino kids couldn’t get it and I was ostracized by them. It made me different and a black sheep, which probably removed me from some of my Filipino friends growing up. Bbut we’re all friends now.

PE: Have you ever felt ashamed of being Filipino?

JA: I wouldn’t call it being ashamed, but I didn’t want to be labelled as different. When I was a young punk rocker going to concerts as the only Filipino attending, I wore it as a badge of honour. Why? Because no one cared. It was just about the music. However, when it came to my professional life, I was tokenized as the “Asian Filmmaker.” That bothered me. I wanted to be known as the awesome filmmaker that happened to be Filipino. I was ashamed that people couldn’t see past my race rather than my skill as a storyteller.

PE: Your show is entitled Recovering Filipino. What exactly did you lose that you want to recover? When and how did this realization happen?

JA: This all started a couple of years ago when my lola, who was headed home to the Philippines, called me a bad Filipino. She pointed out that I’m not fluent in Tagalog and that I don’t know much about our culture. That hurt. I’ve always been kind of the “black sheep” in my family, but I had no idea my lola felt that way about me. So, I decided to do something about it and recover my Filipino identity. Hence the show’s title: Recovering Filipino. There’s also another reason behind the name, but I would rather have listeners learn what that is, by listening to the show.

PE:What do you like best about being a Filipino?

PE: What traits or abilities do you think are uniquely Filipino?

JA: - Our love for the three B’s of Filipino culture - boxing, basketball and beauty pageants. How we embrace superstitions and religion. How we always give visitors food to take home. How we love sweet food and sugar (Why we love sweet spaghetti). How we constantly gain new family at parties. How we love karaoke and it’s a competition.

PE: Do you have a “Proud to be Pinoy” moment you can share with us?

JA: The moment my mom said I could teach the younger Filipinos about our culture and traditions throughout this show. That was amazing. That completely validates what I’m trying to do with this show. But I still need Lola’s approval!

PE: What do you wish to accomplish with the Recovering Filipino show?

JA: Like me, I know many second-generation Canadians who are also mystified by many of our traditions and who haven’t asked their parents about them, or their parents can’t explain them. Since the podcast launched a few weeks ago, we’ve heard from many young and not-so-young Filipinos who’ve said they can relate to the questions I’ve been asking and who’ve thanked me for asking them. There’s this real thirst for second-generation kids like me to better understand where my family came from.

It’s like I say at the start of every episode, there are about 10.2 million Filipinos living outside the Philippines. So, if you aren’t Filipino yourself, you’re likely Filipino adjacent. So, while this show might be about recovering my Filipino identity, I think non-Filipino listeners will learn about their Filipino neighbours. But I hope it also pushes them to ask questions about their own cultural identities. Also, it’s just a really fun show, and my mom’s laugh is guaranteed to put a smile on your face!

JA: I want people to have fun with the listening experience. I’m hoping that these stories will make other second-generation Filipinos want to learn more about the culture.

Recovering Filipino airs nationally Mondays at 11:30 a.m. on CBC Radio One, 990 AM and 89.3 FM in Winnipeg. Episodes are also available any time on CBC Listen, Apple podcasts, Google podcasts and anywhere you find your favourite podcasts.